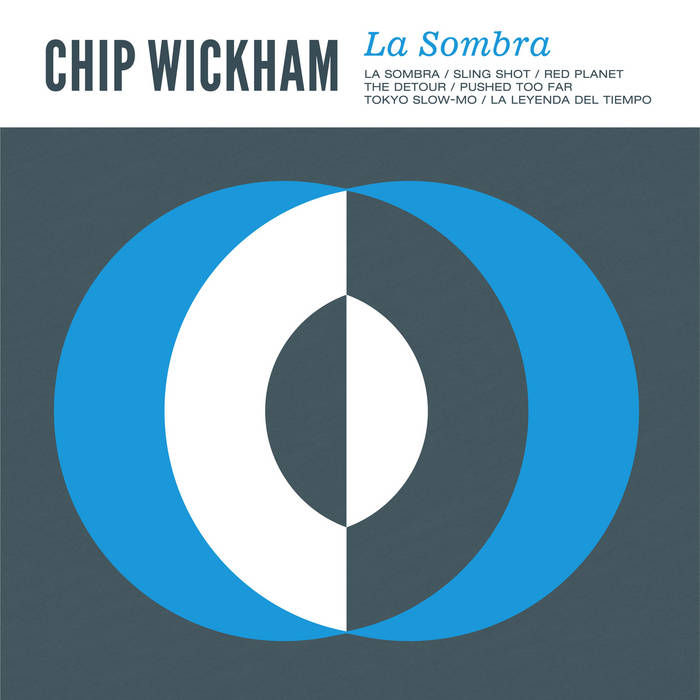 Philip Graham Music to melt to, dance to, sing to. Jazz that is mood music for all moods. Favorite track: La Sombra.

K.E. I have no idea how this album managed to fly below my radar for so long: Chip may be British, but the Mediterranean & Middle Eastern influences shine brightly on his debut; which is not to say that its missing that cool 70's-/mixed with modern Euro-Jazz vibe.
PLEASE treat yourself to the vinyl version, sit back, and let his compositions do the rest :)
Favorite track: Sling Shot.
more...

In recent times Manchester has produced an impressive slew of jazz musicians, with the likes of Matthew Halsall and Nat Birchall both receiving widespread acclaim. A lesser known figure but no less important in the development of the Manchester scene is Chip Wickham, a flautist and saxophonist who soon releases a spiritually leaning and vintage sounding '70s jazz record called La Sombra via Lovemonk Records.

Translated from Spanish as 'The Shade', Chip's debut album drops after a 25-year career touring, recording and experimenting across three decades of jazz, funk, soul, hip-hop, Latin and electronica. La Sombra is a monumental record for Chip as it symbolises the moment he stepped out into the light as a director of his creations with freedom to explore his roots, express and tell his version of jazz and pay testament to his heroes Roland Kirk, Yuseef Lateef & Harold McNair.

Now living in Doha after an intense and productive six years in Madrid, it was Manchester where Chip studied in the late '80s and became enmeshed in the chaotic and thrilling music scenes emanating from one of the world's most culturally prominent cities of the time. Recording and generally 'keeping things real' with Manchester's hip-hop collective Grand Central Records, Rae & Christian, The Pharcyde, Fingathing, Nightmares on Wax, Graham Massey (808 State), Chip was in a city that was undergoing a music revolution with the Haçienda as its temple. Yet it was the headlights of the M62 motorway and not the strobe lights that were lighting Chip's path during his student years ('88-'92). The lure of the jazz and funk clubs of Leeds, where The New Mastersounds were breaking out and building the blocks that would lead them to UK funk royalty status, proved too strong.

In the 1990s Chip continued to refine his craft in the rainy city and the gigs booked were growing in stature. It wasn't long before he was on the road with Roy Ayers and Badly Drawn Boy. Around that time Chip met up with trumpeter Matthew Halsall that was the beginning of a friendship that lasts to this day. Chip was a recording artist on Matthew Halsall's breakout album Sending My Love and continues to work with him, with live dates confirmed in spring 2017. This close connection with Halsall gave rise to other collaborations, such as with Nat Birchall and Go Go Penguin’s Rob Turner.

Three decades after his late night excursions to Leeds, Chip found himself recording with Eddie Roberts from The New Mastersounds in Madrid, as part of their new band, The Fire Eaters, which he'd formed soon after he moved to sunny Spain in 2007 – the same year he released the Fried Samba album under his moniker Malena, his electronic Latin band that became a hit at the turn of the century for Freestyle Records. During his time in Spain he connected with the local scene and brought together many of his musicians colleagues from the UK to Spain and it was for a local and well established label, Lovemonk, that he released two 45s blending raw funk and Latin. These new roads and musical leanings led to an invitation to play for the prestigious Craig Charles Fantasy Funk Band. Based on a poll from Craig Charles’ top rated BBC6 radio show, Chip was chosen to play alongside the cream of the UK funk & soul scene: James Taylor (JTQ), Snowboy, The Haggis Horns (Mark Ronson), John Turrell (Smooth & Turrell), and Mick Talbot (The Style Council).

La Sombra takes an altogether more rooted direction than Chip's recent collaborative work, with the jazz of the late '60s and early '70s a dominating influence to the recordings. Comprising of seven tracks recorded in Madrid with musicians assembled by Chip from Madrid's jazz scene, it combines contemplative explorations akin to Yusef Lateef's early work on tracks like 'La Sombra' and 'Pushed Too Far'. There's a fiery cover of Camarón de la Isla’s classic ‘La Leyenda Del Tiempo’ and tracks like 'Sling Shot' and 'Red Planet' are locked in a groove harking back to Freddie Hubbard's Blue Note era and Nathan Davis.

What others have to say about the album
"I'm a massive Chip Wickham fan." – Craig Charles
"This is coming from the outside, I was like whooooa, easy - Chip Wickham! Blowing hard - they got it right!" – Gilles Peterson
"I love this record" – Matthew Halsall
"Helll yeah, I've been bumpin' this" – DJ Lefto
"This is my kind of jazz… think Harold Land and Bobby Hutcherson 1968 and you'll not be far off the mark" – Eddie Roberts (The New Mastersounds)
"Fxxing love this" – Eddie Piller (Acid Jazz)
"Love this album and coudn't turn it off" – Dean Rudland
"All tracks show an incredible depth, feeling and soul. Will be on my playlists for years to come" – Dr Bob Jones
"Beautiful stuff - played it out last night and it sounded fantastic" – Tim Love Lee (Tummy Touch)
"Really fantastic playing and composition. Wickham has a classy touch that makes his vintage influences fresh and vital sounding" – Tomas Palermo (Forward Ever)
"Slingshot is quality, can't wait for the album" – Mark Further In Fusion
"This album came in somehow like out of the blue late 2016, and has not left my audio ever since" – Michael Rütten